Our local campus pharmacy has an interesting side business selling a variety of Korean and Japanese drinks, snacks and ice-creams.

At the moment they have an interesting range of Sangaria drinks from Japan. Today I had one of these — the 500ml Miracle Body V: 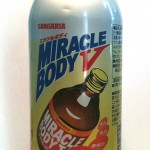 It tastes a bit like your typical guarana enriched smart drink — a bit like candy flavoured dirt. This one slightly less on the dirt side than most.

What the hell is plant worm extract?

Muirapuama — “potency wood” — according to wikipedia

The root and bark are used for a variety of ailments by indigenous peoples in the Rio Negro area of South America, and have become popular as herbal treatments for sexual dysfunction, but the effectiveness of muira puama preparations are debatable[2]. There is evidence that Muira Puama is anxiogenic, which would be consistent with a stimulant effect, without affecting coordination

Further from the patent:

So Clavicipitaceae — apparently not an actual worm, how disappointing. It’s some kind of fungus. No idea what that’s for but presumably like the muirapuama it’s some kind of “potency” mushroom.

I’m not feeling any more potent than normal, perhaps a little twitchy and I’m having to restrain myself from grinding my teeth.

The walls appear to have stopped pressing in on me at the time of this post — some couple of hours since I consumed the beverage.